The Limits of Knowledge

The third millennium BC Akkadian imperial penetration of the north Mesopotamian plain was the terminus of the village-state-empire trajectory of sixth to third millennium BC West Asia (Adams 1966; Stone 1995; Fig. 1). This cultural evolution paradigm emerged as the successor to Smith’s “Four Stages” (1776, Meek 1978) and Morgan’s Ancient Society (Leacock, ed., 1963), but only after the translation of the Weld-Blundell prism (Jacobsen 1939) and the retrieval of Akkadian Manishtushu’s temple rebuilding at Nineveh (Childe 1936; Adams 1966; Weiss 2003). Now, fundamentally entrenched in our textbooks (e.g., Nissen 1998; Wenke 2000, Roaf 1996; van de Mieroop 2004) and monographs (e.g., Liverani ed., 1993; Westenholz 1999; Glassner 1986; Goodnick Westenholz 1997) Akkad is “the first empire.” But the origins, nature, function, and effects of the Akkadian empire are not known—they are only described, meaninglessly or with various contradictory meanings, as “imperial.”

Was this empire imperial? If so, how? Or was the Akkadian dynasty’s rule “decisively short of full imperial control” (Adams 1966: 159), and only a simpler control of adjacent territory’s trade routes to distant regions’ strategic resources (e.g., Michalowski 1993; Marcus 1998; van de Mieroop 2004; Nissen 1988)?

The origins of the Akkadian empire, of course, are not open for investigation: we do not know how this empire was constructed but for Sargonic “great man” self-descriptions in 4,000 year old royal inscriptions (Frayne 1993). We do not know where the empire’s capital was located, although it was inhabited, and mentioned in contemporary documents, for two thousand years (Weiss 1975; Weiss 1991). In fact, the only certain Akkadian “imperial” features are its collapse, emphasized in the native sources with the Sumerian King List’s “…who was king, who was not king?…” (Jacobsen 1939), Shamshi-Adad’s “…seven-generations since the collapse of Akkad” (Grayson 1987: 53), and a millennium-long ideological (re-) presentation as the first unified control of Mesopotamia. 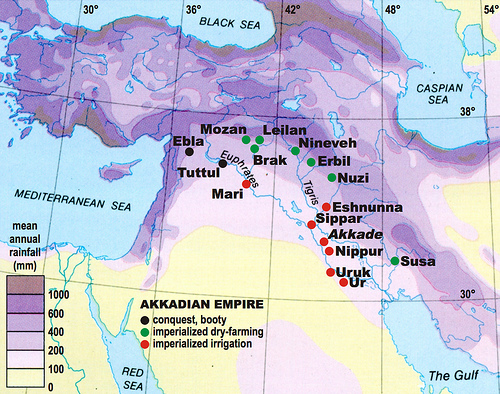 Archaeologists are hesitant to define “empire” (e.g., Sinopoli 1994; Alcock et al. 2001). But in both Mesoamerica and the Andes archaeologists have refined knowledge of ancient imperialism (Blanton 1996; Earle 1989, 1994; Hastorf 1990; Murra 1980) using familiar political economy categories (Mommsen 1980). In spite of, or because of, inadequate data and much confusion, “Was there an Akkadian empire?” is still answered today with three apparently exclusive hypotheses:

At Brak, the Naram-Sin “fortress,” or “whatever” (van de Mieroop 2004), is long gone, and the ritual/cultic buildings recently retrieved provide little insight into the Akkadian program for the Habur Plains (Oates, Oates McDonald 2002). At Mozan, a local palace was co-opted by royal marriage to the daughter of Naram-Sin (Buccellati and Buccellati 2002), but the excavators do not credit Akkadian control of the city, and the significance of the Akkadian administrative documents retrieved from the palace (Milano 1991) is not clear.

In sum, the extant data provide little or no opportunity to extend, test, or refine the Akkadian agro-imperialism hypothesis. We need to “excavate sites at the upper three tiers of the hierarchy to recover the buildings that reflect state institutions” (Flannery 1998: 55). We need access to an Akkadian administrative building.

Tell Leilan was the Akkadian provincial capital that controlled the most extensive and the highest yield agro-production on the Habur Plain (Weiss 1984; Besonen and Cremaschi 2004). It is the city most frequently mentioned in Akkadian administrative texts and sealings from Tell Brak/Nagar. We are initiating the total recovery and analysis of the Akkadian administrative building (AAB) at Tell Leilan/Šehna.

AAB was located in 2002 on the Leilan Acropolis NW directly across the sherd- and stone-cobbled street from the Akkadian schoolroom. Approximately one-sixth of the last of three construction levels, each estimated to be ca. 1500 square meters, were exposed in the last weeks of the Tell Leilan Project 2002 excavation season (Ristvet and Weiss 2004; deLillis, Milano, Mori 2004).

The rebuildings and re-use of the building comprise about 2 stratified meters; the building’s terminal occupation is stratigraphically the terminal Leilan IIb occupation of the Leilan Acropolis, and it was not succeeded by any ancient constructions. Total retrieval of this stratified building may require five or six seasons of excavation, perhaps ten years of multi-disciplinary research.